September 12, 2019: In Research Triangle Park last week, RTI community members past and present, as well as external partners and other attendees, gathered in the William M. Moore Jr. Collaboration Center in Horizon Building to celebrate the institute’s 60th anniversary closing event. The event marked the culmination of a year’s worth of events and activities that highlighted RTI’s impact on the world and honored the global culture that makes the institute such a special place to work. (View the photo gallery below.)

In his opening remarks, RTI President Wayne Holden welcomed attendees, recognizing retired RTI leaders and staff members, including Fellows, and former and current members of the RTI Board of Governors who were in the audience. He also gave a nod to Band 58 (watch them perform), the group of RTI musicians, plus an IBM contributor, who performed in the Horizon Building lobby. The band members included

After his welcome, Wayne discussed the year’s main events, including:

Wayne also noted activities such as the flash mob and trivia game and creative contributions such as the 60th anniversary trading cards.

During the opening, Wayne received the 60th anniversary commemorative globe that has been traveling around the world all year from Rodney Humphries, Facilities Strategic Services.

“The intent was to bring everyone together for a chance to party with the globe,” Wayne said. “Almost 1,800 staff partied with the globe.”

Wayne listed all the locations where the globe traveled and revealed that it would be placed in the new 60th anniversary kiosk, along with an interactive display on the second floor of Horizon Building.

Following Wayne’s opening, he played an anniversary recap video, created by a team from Corporate Communications.

Chief Human Resources Officer Lisa May, anniversary planning committee executive sponsor, then shared remarks about the accomplishments of the committee, the Logistics team that oversaw the globe’s travels, and the anniversary website team over the past year.

“When Wayne said that the party had to be a year long, we did what we do at RTI and put together a cross-functional team to start to plan something worthy of an anniversary,” Lisa said. “We ended up talking about how we can be as inclusive as possible and make it as fun as possible.”

After highlighting all the hard work of the committee, Lisa closed, saying, “We’re an organization of nearly 6,000 worldwide, and when we share our successes and party, we can reflect our culture and values. I’m very proud to be associated with this organization and can’t wait for the next 60 years.”

After Lisa’s remarks, Wayne shared another Corporate Communications video – this time on partnership, a key component of the celebration year.

“Partnership is critical to work we do,” he said. “Our alignment with partners is really important. It helps us to be creative, execute, and get things done across time.”

To commemorate the year, Wayne introduced the digital time capsule – a collection of multimedia elements that will be opened by RTI staff in 2038. Lucas Blair, director of Lab 58’s immersive technology lab, helped Wayne demonstrate what staff in 20 years will see when they place the virtual reality goggles on – or utilize some similar technology – to look back at the 60th anniversary celebration. On screen, staff saw what Wayne saw: a party in Nigeria, the location of RTI’s first international project, where staff members wished the institute a happy birthday.

“Now we have a very vibrant IDG group that spans 50 or 60 countries,” Wayne said.

Wayne asked the entire audience to stand up and say hello to the institute of the future via 360-degree cameras set up in the room, for inclusion in the time capsule.

Following the opening segment, Wayne introduced Dr. Arnold, the event’s keynote speaker. Dr. Arnold is the Linus Pauling Professor of Chemical Engineering, Bioengineering and Biochemistry at Caltech, where she also serves as director of the Donna and Benjamin M. Rosen Bioengineering Center. Caltech, where Dr. Arnold has worked for nearly her entire career, is home to 38 Nobel laureates. She is the first woman among them, and the fifth woman ever to win the Nobel Prize in Chemistry. In 1993, Dr. Arnold conducted the first directed evolution of enzymes, which are proteins that catalyze chemical reactions.

“Dr. Arnold’s work in evolutionary chemistry has far-reaching implications for human beings and the natural world,” Wayne said. “The real-word impact of her work includes more environmentally friendly manufacturing of chemical substances, such as pharmaceuticals, and the production of renewable fuels.”

Wayne shared Dr. Arnold’s track record of success in the commercialization of her work, including Provivi and Aralez Bio, and used her as an example for RTI scientists to follow.

“As you all know, commercialization plays an increasingly important role in our own overall strategy at the institute,” Wayne said. “In this room earlier this week, we celebrated the inaugural winners of our Enterprise Awards, recognizing RTI innovators who are meeting the needs of our clients and the marketplace. We should look to Dr. Arnold and her work for inspiration as we focus as scientists and researchers on our commercialization efforts.”

Wayne closed with one of her maxims, as shared in a recent New York Times feature: Give up the thought that you have control. You don’t. The best you can do is adapt, anticipate, be flexible, sense the environment and respond.

“Her advice is relevant for all of us who are committed to rigorous research and working on scientific solutions to the world’s greatest challenges during challenging times.”

Dr. Arnold congratulated RTI on throwing a year-long party and launched into her presentation, Innovation by Evolution.

She shared that she was inspired by the best chemist and engineer on the planet: the biological world, which has figured out how to take renewable resources and convert them into living, adapting, self-repairing, sometimes even thinking machines. She wanted to use the chemistry of the biological world for human good.

Dr. Arnold provided examples of her work in renewable fuels, renewable agricultural practices and the merging of human chemistry and evolutionary biology.

“We’ve been given the most powerful design process in the history of the planet,” she said. “It can be used to move into the future in real time – not just optimize, but innovate.”

She credited the scientists who have contributed to her lab at Caltech, noting that they come from all over the world in the hope of doing good for human beings, to solve real-world problems.

The morning portion of the event closed with a kazoo chorus* of all attendees, led by Lisa May and Corporate Communications Vice President Kami Spangenberg, to the tune of Kool and the Gang’s Celebration. Staff members around the world participated in the kazoo chorus, even RTI's telecommuters.

Afterward staff gathered for food served by Eurest, more music by Band 58 and activities on the lawn and terrace outside Horizon Building. 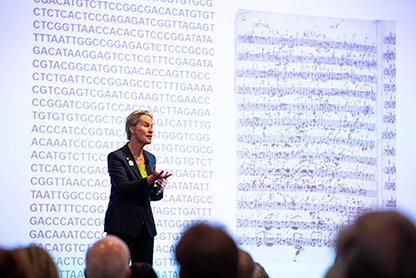 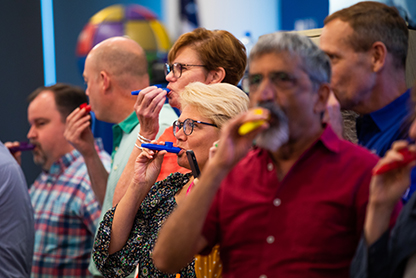 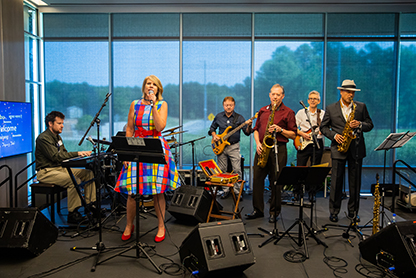 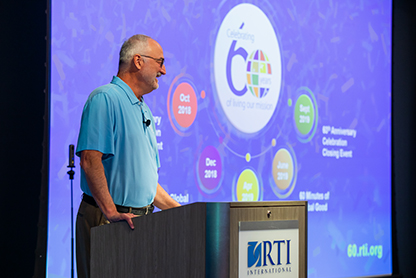 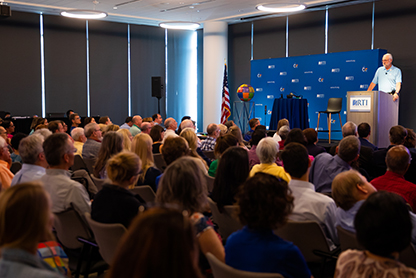 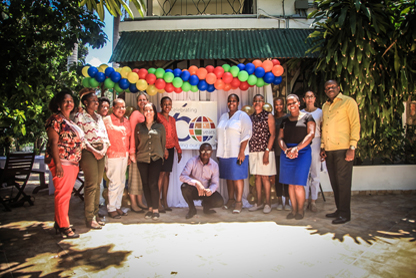 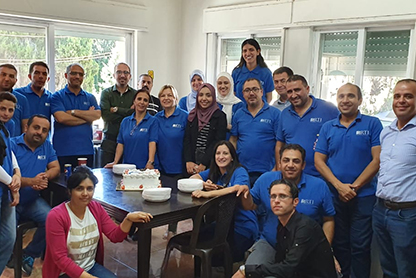 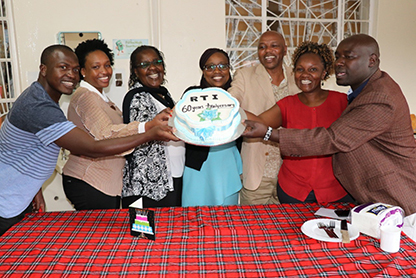 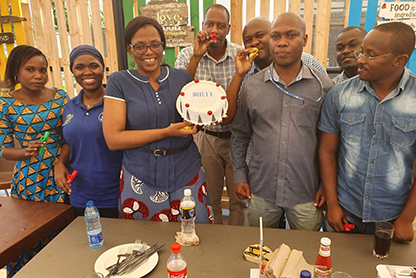 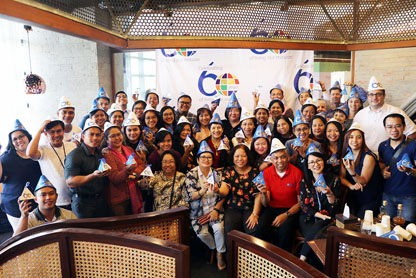 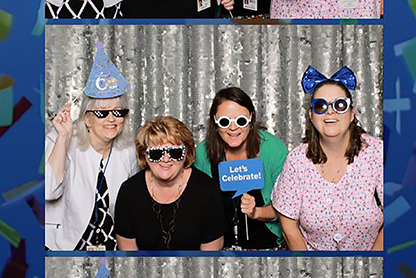