“George ran the joint with no complaints from scientists and administrators”

George R. Herbert, Jr., was born in Grand Rapids, Michigan, on October 3, 1922. He was an only child whose mother managed a telegraph office in East Lansing, where he grew up; his father was a district manager for the State of Michigan. As a young man, Herbert worked nights at his mother's office to put himself through Michigan State University. His ambition was to become an admiral in the navy, and after two years he left MSU and received a congressional appointment to the U.S. Naval Academy in Annapolis, Maryland, graduating in June 1945 with a BS in electrical engineering.

World War II had ended, also ending the young ensign's chances of becoming an admiral. Herbert left the navy to become an instructor in electrical engineering at MSU, but the pay was low and, with a young wife and a growing family to support, he took a higher-paying, albeit unsatisfying, job at a well-surveying company. Serendipity then intervened. On the way back home from the navy, Herbert had met Jesse Hobson, who was on his way to Palo Alto, California, to become the executive director of the new Stanford Research Institute (now named SRI International). The two men hit it off and exchanged phone numbers.

Unhappy with his current job, Herbert phoned Hobson, who offered him a position as his administrative assistant. When Herbert packed up his family and moved to Palo Alto, there were only 40 employees at the nascent institute. Earning Hobson's respect and the high regard of the institute's scientists, Herbert steadily climbed the SRI ladder, reaching the second highest rung–executive associate director–in 1955. "George ran the joint with no complaints from scientists or administrators, and that is saying a lot," recalls a friend from the period. "He was infinitely patient and had great vision."

Herbert knew that, without a Ph.D., his chances of becoming executive director of SRI were slim. In 1956, he left the institute to become treasurer of American and Foreign Power in New York, where there was more of a direct opportunity to become the utility holding company's president. But no sooner had he dusted off his desk than George Watts Hill, who had replaced Bob Hanes as chairman of the Research Triangle Committee, called to invite him to North Carolina, explaining that he wanted to "pick his brain" about contract research institutes. Shortly afterward, in December 1958, Herbert became the first president–and the first employee–of the new Research Triangle Institute. 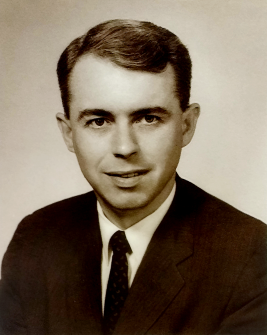 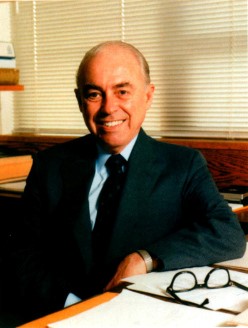 Two portraits of RTI's first president, George R. Herbert: early in his career, and shortly before his retirement in 1988